The Bruins begin their campaign to Keep The Cup in Boston tonight at the TD Garden. The B’s will raise the 2011 Stanley Cup Champions Banner before they host the Philadelphia Flyers in the most highly anticipated season opener in Bruins history. Boston is hyped for hockey, and the team looks like they have a legit shot at a Stanley Cup repeat. 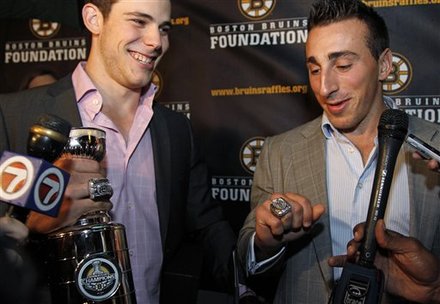 Seguin and Marchand Check Out their Stanley Cup Championship Rings

Boston’s club has a nice youth movement to balance out Veteran leadership. Tyler Seguin and Brad Marchand will take a much bigger role in the Bruins plans this season as they evolve into veteran players themselves.

Predict How Many Goals Seguin Will Score

Beantown got a taste of the Stanley Cup this summer, and Claude Julien’s gang does not want to let the coolest trophy in sports leave Titletown. Watch Boston vs. Philadelphia on Versus at 7 pm ET.

Tee of the Week!, How We Roll!