Earlier today, I wrote what now seems like a hilarious piece about how today could be Ochocinco’s day to break out. Silly as it sounds, I still think it could have been. All he had to do was catch that perfect bomb from Brady on the Bills’ 5 yard line in the 4th quarter and stride into the endzone.

Hey, It’s Me Chad. How Do I Catch the Ball Again?

Ochocinco could have silenced his critics and finally contributed to this Patriots team. But his butterfingered blunder was one of the worst drops I’ve ever seen a professional Wide Receiver make. I understand that catching every ball thrown to you is NOT as easy as it looks. However, I think it’s fare to judge Ochocinco for failing to pull in a picture perfect toss in the 4th Quarter inside the Bills’ 10 with the game on the line. Chad’s been waiting for that opportunity ever since he arrived in Foxborough.

Brady Put It On The Money, Ocho Couldn’t Haul It In

How could you let us down, Ocho? If you read our blog you probably know I have been one of the biggest Ochocinco defenders in New England. But that was simply inexcusable. Thankfully Wes Welker (BEAST) saved the drive by hauling in clutch passes and miraculously finding the end zone. 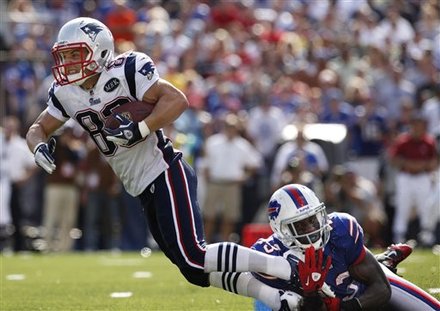 But the extra time New England had to waste to finish that drive after Ochocinco’s drop ended up haunting the Pats. The Bills knelt on the ball for what seemed like 18 strait plays to run the clock down and end the game in a bizarre, disgusting fashion.

I don’t care about the tweeting or the personality or anything else: just catch the damn ball when Brady puts it in your hands. Ochocino’s dropped pass reminded me of Reche Caldwell against the Colts in the 06 playoffs. There are certain plays you just have to make. Consider this my leap off the Ochocinco bandwagon.

Pats favored in every regular season game this year

Can Belichick Turn The Patriots Around?

Nate Ebner to play rugby sevens in the Olympics