After a small skid, the Red Sox may be back on the winning path after a 14-0 slaughter of the Blue Jays last night.  Marco Scutaro led the charge on offense with 4 RBI. Jon Lester cruised, pitching 7 innings allowing only 3 hits and racking up 11 K’s. The Sox had lost 5 of 7 heading into yesterday, drawing concern from Red Sox Nation.  Boston still sits 2.5 games behind New York in the AL East, but at least they stopped the bleeding.

Even more important to the big picture is the news about Josh Beckett’s ankle.  After meeting with a specialist in Boston, reports indicate Beckett has a sprain, but no ligament damage. That means he could pitch again as soon as next week.  Red Sox fans can breathe a huge sigh of relief, as their World Series hopes hung in the balance ever since Beckett left Monday’s game with the injury. 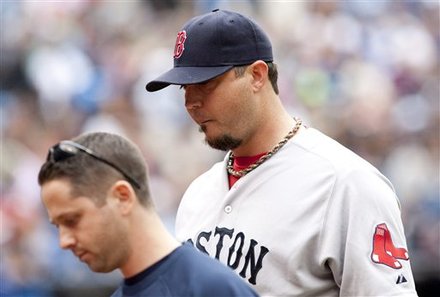 I wouldn’t expect the Red Sox to rush Beckett back to action with only 3 weeks left in the regular season.  Look for him to rehab for a couple weeks and pitch one more start to keep his rhythm heading into the playoffs. Catching the Yankees would be nice, but he number one priority for Boston needs to be health, especially in their starting rotation. If the Red Sox are going to Win the World Series, they will need Josh Beckett to be in top form.

It Keeps Getting Better for Charlie Chowdahead