Andrew Miller, the lanky left-hander recently called up from Pawtucket, could be the answer to the Red Sox pitching problems. 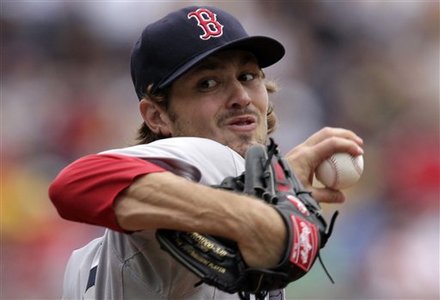 Daisuke Matsusaka’s time in Boston is likely over, and big money starter John Lackey has been absolutely atrocious as of late.  Clay Buchholtz is on the DL; and  Josh Beckett, who has been one of the best in the bigs this year, has been suffering from an illness that has kept him off the mound for the past week.

Enter Andrew Miller.  A tall, 26-year-old lefty with the ability to reach the upper 90s in velocity and a big 12 to 6 curveball. He wasbrilliant in his first start against San Diego until one misplaced fastball resulted in a 3-run homer.  He recovered nicely, finishing with a no-decision.

In his second appearance (Sunday) Miller was dominant against the Pirates.  He showed calm under pressure, escaping a No-Out bases loaded situation conceding only one run.  A lefty with that kind of stuff, command, and coolness under pressure would be a valuable asset to any team.  When Buchholtz returns from the DL the rotation will be very crowded.  Someone will be forced into the bullpen, whether it be Veteran Tim Wakefield or the struggling Lackey (below).

While the controversy is an issue that must be addressed, it is certainly better to have too many starters than not enough.

One thing is for sure, if Miller continues to pitch like this, he will not be the odd man out.

Should Rusney Castillo start the year in the minors?

The as advertised Red Sox have arrived!