It is easy to say that the Bruins are the top team in the land right now.  Baseball is the only major sport alive at the moment, and it is smack dab in the middle of a long, long season.  So, obviously, the team that recently won the most epic trophy in pro sports could automatically be considered top dog for American sports fans.

However, this Bruins squad is the coolest team around for more reasons than one.

Having been a Boston Sports fan my whole life, I have passionately followed many teams.  This B’s group just seems different.  I have never seen a team with such a connection to the fans. 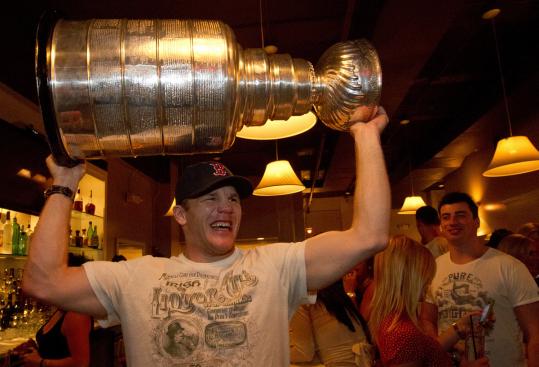 After winning the Stanley Cup, the players have been seen all over Boston with the trophy.  Fan favorite  Shawn Thorton has earned the love of Bostonians by wearing his Red Sox hat.

Then, there was the now-famous night at Foxwoods where they racked up a $156,000 tab partying with the Bruins faithful.

These guys seem like down to earth people who truly love this city and the fans.  The connection was evident at the parade on Saturday, where 1.5 MILLION people gathered in Boston to salute the hockey team.  In today’s world where some sports stars like Lebron James think of fans as lesser people, it is great to that some athletes still understand that professional sports are just as much about the fans and the the city as they are about the players.