After 2 of the most heartbreaking losses you will ever see in the Finals of any professional sport, the Bruins have rebounded to seize control of this series. 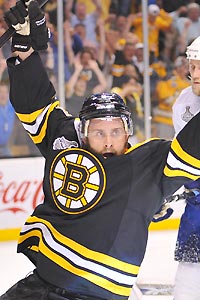 The 4-0 drubbing of the Canucks last night brings the overall score to 12-1 for the 2 games in Boston.  Not only have the B’s been pummeling Roberto Luongo, (who eventually got yanked last night) they have been dominating the physical aspect of the game.  Cheap shots by infant child Alex Burrows (still teething?) and scumbag Aaron Rome were not taken lightly by the boys from Beantown.  If the Burrows incident was the moment that elevated the intensity, the Rome hit was the turning point of the series.

Ever since scoring sensation Nathan Horton was brutally knocked out of the Finals with a concussion, this has looked like a different Bruins team.  Horton’s retro leather jacket has become a talisman for the squad, and hangs in his locker inside the dressing-room.  Horton reportedly placed the jacket on his replacement, Rich Paverley, before last night’s game.

Peverley scored twice last night, comforting fans who may have concerned about the loss of the Bruins’ best scorer.

Ever since Horton’s injury, the fire, passion, physicality and focus of the B’s has overwhelemd Vancouver.  The Canucks have been silenced, scoring only 1 meaningless goal (the contest was all but over by the time they scored in game 3) in 2 games at the TD Garden.

Tim Thomas was untouchable, making 38 saves to shut out Vancouver.  For the second strait game, Thomas not only dominated between the pipes, but set the tone with an act of aggression that put the Canucks in their place.   Late in the 3rd with the game out of reach, Notorious pansy biter Alex Burrows was attempting to knock Thomas’ stick out of his hand in true Vancouver cheap shot form.  Thomas retaliated by chopping Burrows in the  leg with his goalie stick, then smashing him in the face with a left hook when he turned around.  Burrows was then taken to the ice by Thomas and Dennis Seidenberg. 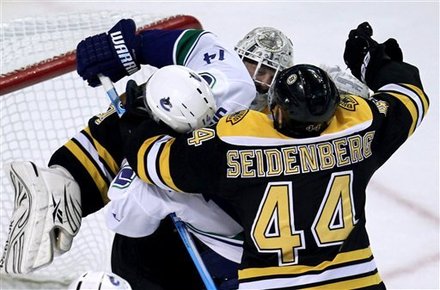 A poignant cap to a wonderful 2 game stretch in Boston.  Game 5 is Friday night in Vancouver.  Hopefully the B’s can carry some momentum back to the West Coast and take the series lead!

Tee of the Week!