FORT MYERS, Fla. — If you think 6 into 5 doesn’t compute, Clay Buchholz figures he was faced with an even more unworkable equation last season.

“I came into camp ready to pitch,” Buchholz said Wednesday morning, “knowing I had a Hall of Fame guy [John Smoltz] that’s competing for the job, that’s new coming in, I knew he was probably ahead of me. We had Brad [Penny]. I knew he was in front of me. So I was No. 7, maybe No. 8, on the depth chart.

“So it’s a little bit different this year, knowing I have a legitimate shot to win a spot. At the same time, I’m not going to think about it like it’s my spot. I still have to win it.” 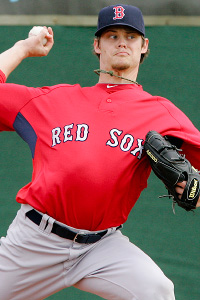 Buchholz is competing for the No. 5 spot in the Boston Red Sox‘s rotation with knuckleballer Tim Wakefield, who had offseason back surgery but says he’s fine now. Wakefield said he expects to start, and the Red Sox said they are best served with Wakefield as a starter. –Full story